Meta-calculator.com was a fun site and project, but

You’d think that having traffic levels that require a dedicated server would be an unequivocally good thing, right?

Well, when our traffic levels initially hit dedicated server levels, managed hosting seemed to be the  easiest solution. I mean–why not let your hosting company defend your sever against viruses and do all that other system admin stuff?  Well, after having used inmotion hosting’s managed dedicated servers for 1 year, I can tell you that  that there are some draw backs.  For instance, managed hosting accounts frequently restrict your ability to configure the server , often do not grant root access  or,i f they do grant root access, make you jump through all sorts of hoops , and managed hosting accounts do not give you control over who is doing sys admin work. The latter became critical when our traffic levels started getting too great for a single server–we were unable to tweak the server and do other optimizations . Even if the managed host provider is willing to configure the server, you have to wait in their queue for requests to be administered.

The first  9 months or so  went well at inmotion, but when our traffic levels started to be too much for 1 single server , it became clear that managed was no longer viable–another “good problem”.

More traffic is better, of course, but how do you go about setting up a load balancer? Where can you find a reliable sys admin? These were problems I had been blissfully unaware of.

All of these questions were eventually answered–we moved to AWS and after some trial and error with different server set ups (ngingx vs apache and load balancing), things started smoothing out.

AWS has a lot going for it–mainly in terms of its scalability and configurability. You can set up anything you want, configure it how you want. Scalabilty was huge since it’s become an annual problem for our sites that continue to grow–If traffic levels continue to increase as they have over the last 3 years, with AWS you can simply ‘scale up’ your instance! My hope is is that 2014 will be the first year that we won’t have any extensive down time due to excessive traffic overload .

So, what is the downside to AWS? Well, the ability to configure your server any way you want is due to the fact that AWS does nothing for you. They just provide a blank box. It’s up to install an OS, to set up a server, database, sftp server –no small task. Certainly not something that the layman (read : your humble author) can do. Trust me that you need an experienced, system admin who can set things up as well as manage the server, defend it against brute force DDOS etc.. 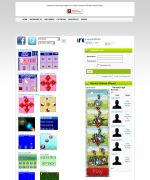 What do you do when you have too many websites that take up too much of your time? Well, I decided to sell 1 or 2 of them including themathgames.com, a site that I put a lot of time into building up around 2008-2010 .

It was fun working on that site but the fact is is that the audience age level for that site does not match the age levels of our sites. Mathwarehouse.com, meta-calculator.com and others target an audience that is , in general, older–usually substantially older.

So, what’s the best way to proceed selling your site? I first reached out to some fellow site owners who operate competing sites and found some interest. In fact, I have a decent offer from one of them. However, in the end, he was unable to commit to the sale . So enter Flippa!

Things are looking good at Flippa. I have been PM’ing a serious sounding buyer and it looks like I’ll be 1 domain shorter soon !